In case you haven't heard, the Santa Ana winds have kicked up in Los Angeles and Orange County and it has been a wild 24 hours. Last night around 10:20pm a brush fire in Sylmar (San Fernando Valley) got out...

Sunday we went to Vroman's Bookstore in Pasadena for the Martha Stewart book signing. Martha was signing her 66th book, Martha Stewart's Cooking School: Recipes and Lessons for the Home Cook. I didn't realize when we bought our books a...

I made it back through 688 posts, but I think it is time for bed.

I am doing NaBloPoMo on my blog. You can get the feed,

I am also Tweeting away.

princess_molly usually tricks people in this meme. And

onetakemovie got me back for eating his candy. ;)

Hope everyone had a Happy Halloween!!! I had brownies for breakfast!!!

This month has flown by. How can Halloween be tomorrow?

We got candy for potential Trick-or-Treaters. Last year we got three kids and had no candy, so were forced to shut the lights off and hide upstairs. This year we decided to be prepared, just in case.

We bought some candy a few weeks back and HID it so we would not eat it before Halloween. Apparently we hid it really well. B found it this morning, looking for Target bags, and hid it again.

I found it and opened the bags and put in a plastic pumpkin I picked up for $1.29. I joked that the monster under the stairs who lives in the room we call the Harry Potter chamber, took the candy. I said we were now forced to wrap ourselves in tin foil and hit all the Chipotle restaurants we could, until we exploded. They are giving away food if you show up dressed like a burrito (or taco) - but you can't just put foil on your head and claim to be a burrito. Given the price of aluminum foil, you would have to hit two stores to break even on that deal.

A neighbor has a "yes on prop 8" sign in their yard. They also have two male scarecrows. I suggested setting up a wedding for Halloween. B said I was a troublemaker.

Meanwhile the neighbor to the back had a little grass fire over the weekend. They were not home when it happened. B noticed the smoke while he was in the shower.

Another neighbor rang our doorbell to alert us to the fire. He went back and checked to see what was happening (by climbing on the fence). There is a ravine filled with trees between the two fences, so it was impossible for us to get to. I told B to call 911.

He got disconnected during the transfer to the fire department. Meanwhile I tried to find (the front of) the house behind us. That sounds like it would be easy, but they are in a different development, and you can't just drive around the corner. As I headed back, I saw two large fire trucks pull up to the house along with support trucks. They went back in the yard and determined it was a grass fire and then used laminated paper maps to find the house.

Shortly after the fire trucks headed out, two Sheriff Department cars pulled up. We directed them to the fire. Thankfully it was minor, but given that it was over 90F, the Santa Ana winds were blowing, and we were under red flag alert, I know we did the right thing calling. Why none of the other neighbors thought this way is beyond me and honestly frightening.

whatilove!!! Wishing you much happiness and love in the year ahead and always!!! Love how things are unfolding in your life and hope they continue to bring goodness and grace.

This past weekend we attended Blog World Expo. Got back from Vegas last night around 8pm. The sprinklers were running, and it was clear we were in time for Southern California's Indian Summer. I haven't been to Las Vegas since...

{one} B left the lights on, so the car won't start. AAA is thankfully on the way, so he can go to the grocery store. Suddenly think that banana (with a bowl of Rice Krispies) I had at 5pm wasn't such a bad idea. Dinner will be late tonight.

{two} I was lying in bed a couple of days ago thinking, how can my sister be dead?* Then there was a gust of wind strong enough that it knocked the IKEA floor lamp over. Needless to say I got my butt out of bed and was a tiny bit freaked.

{three} I seem to have a lot of good ideas, but not much motivation.

{four} Next week at this time I will be in Las Vegas. Going to the big blogging conference. Excited and overwhelmed at once. Anyone else attending? I have a discount code.

{five} $64 at Target got me razor blades, liquid soap, cotton pads, aluminum foil, toothpaste, 2 bottle of Clorox 2 (on clearance), counter cleaner, and enough toilet paper to last me until 2009 (I hope).

{six} While shopping at Target I entered the wrong PIN number three times, and then just paid with my credit card. Shortly thereafter I realized I was entering too many numbers. Oops.

{seven} I am worried that the Clorox 2 was on clearance, as it was also recently out of stock at another Target. This stuff is the best at getting the laundry clean, especially those tough stains.

{eight} Tomorrow we go to some swanky party and watch the sunset in Palos Verdes for alumni of the University of Chicago. 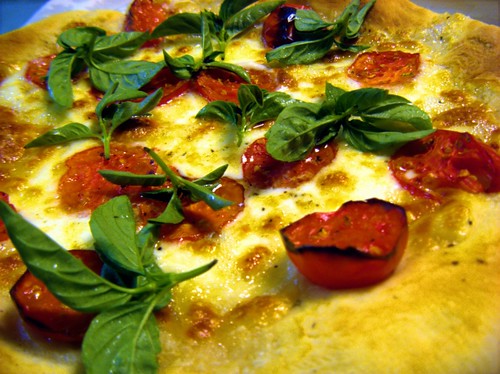 pizza (09/10) 110/366, originally uploaded by one take movie.
Last night B and I made pizza. The basil and tomatoes were from our tiny garden. The mozzarella cheese was fresh. And the dough was ready to roll from Fresh & Easy.

We had planned on grilling it, but had to finish it off in the oven. The coals just didn't stay hot long enough.

What is really funny is that we had been watching Jimmy Kimmel recently. Jimmy assigned his "Uncle Frank" to make a pizza. Uncle Frank went to the local grocery store and spent $236. The end result was a single (double crust) pizza that had everything from imitation crab to caviar on it, and which Jimmy declared disgusting.

Our pizza cost around $8. And it was anything but disgusting.

I still don't consider myself a pie expert, but I have learned a few things. As they relaunch "Pushing Daisies" soon, I figure I would post a few tricks I have learned as soon everyone will be wanting pie:It is...